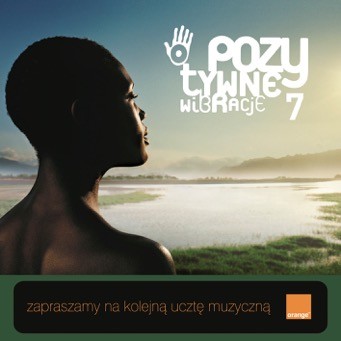 All those who are with Pozytywne Wibracje for years will feel the seventh part of the series has been created especially for them. There’s been a return to the roots! New music, mixed with old, liked, vibrating songs. All this in a party-play and stylish set, to guarantee a high level.

On the day of the Pozytywne Wibracje vol. 7 premiere (7th of November 2005) invited by STX Records (publisher of the series) – in Warsaw with a single concert in Europe, performed Macy Gray (she is on the 7th album). On the same night at 10PM the opening party for Pozytywne Wibracje 7 and after party following the Macy Gray concert started in the Centrum Artystyczne Fabryka Trzciny.

On the Pozytywne Wibracje vol. 7 (digipack – 2CD edition) there are among others:

In the recent two years the creators of Pozytywne Wibracje presented three-disc albums signed with “Pozytywne Wibracje” brand. This was a successful experiment. Many people however couldn’t afford such expensive albums. Apart from that there is nothing like tasting a concise, well thought out in every inch mix, according to the recipe which Stanisław Trzciński – the series author – had prepared for the first time in 1997.

But it’s also worth noting that the author of the series is not only remembering the old friends of Pozytywne Wibracje. From all his heart he is fighting for more of such music in Poland. Because, according to Stanisław Trzciński, “there is nothing more important, more exciting, than a newly acquired listener, who had been used to current hits and greatest hits and suddenly discovers that music is great riches. Those stubbornly promoted in Polish in many media outlets “pseudo-hits” wear us down with mediocrity – says Trzciński. – Some people state that the research indicates that this is what Poles listen to. But I have other research. I have a different opinion. It’s validated by out nine-year-long adventure, high sales of tens of compilations and albums of the artists who are on our anthologies and full halls and stadiums in good concerts in Poland.

Music changes the customs and tastes. But it’s also a perfect communication channel for many client in our market. After many years of consistent work to awake greater trust of the advertising market to music marketing, sponsors supported the Pozytywne Wibracje more intensely, and they also sponsored the only European concert of Macy Gray with the band, on the day of the premiere of Pozytywne Wibracje 7.

Stanisław Trzciński says: Culture, art, and even entertainment music badly needs the support of patrons and wise investors. In turn the support of these patrons only makes sense to them if it is noticed and rewarded publicly. After those ten years on the market I have a feeling that we are preparing next musical projects not for hundreds of people but for tens of thousands of people.

This related to discs, and also concerts and media actions and advertisements. Sponsoring is mostly connected to sports in Poland. But music, especially the really good one, is becoming attractive again, and is and effective means of communication. It’s also a belief of our partners and sponsors. Including Orange. That’s why on the day of Pozytywne Wibracje vol. 7 premiere we invited to Warsaw, to the only concert in Europe, Macy Gray and a band of almost twenty people.

Good music will always defend itself. Sometimes it will help. Sometimes it will numb pains. It’s a power – adds Trzciński. – Thanks to those who support us, including of course the fans of the Pozytywne Wibracje series for their trust.